MAPP at the Harry Ransom Center in Austin, Texas (Day 2)

In case you missed it, check out the blog post about the first day of MAPP at the HRC.

Day 2 featured the Feminist Infrastructures: Women in Transatlantic Publishing 1900-1950 conference. We began with a warm welcome from HRC director Stephen Enniss, followed by a MAPP-led roundtable. The roundtable featured a brief discussion of our new site and UX re-design and an overview of MAPP biographies, which have recently changed to a new reviewer policy. Helena Clarkson also discussed MAPP's copyright workflow for images as well as the new transcription workstream (headed by Helena), in which MAPP and the University of Reading's Special Collections team are working with volunteers to undertake human transcription of correspondence in our database.

After a short break, we moved to our first papers. The first paper was by Dr. Clare Hutton, who discussed the planning of the Women and the Making of Joyce's Ulysses exhibition, which is on at the HRC until July 17th. It was interesting to hear about Dr. Hutton's experience in curating the exhibition, which she did entirely remotely over a large number of Zoom sessions with HRC staff. Dr. Hutton also discussed the intense research process involved in her most recent book, Serial Encounters: Ulysses and the Little Review, which tracks the text's publication in serial form and the revisions Joyce made to the text in preparing the Shakespeare and Company edition. Perhaps most fascinating was Dr. Hutton's linking of Joyce's revisions to the text to the substantial financial support provided to him by Harriet Shaw Weaver.

The second paper was by Dr. Laurence Cossu-Beaumont of the Université Sorbonne Nouvelle and focused on Jenny Bradley and the William A. Bradley Literary Agency--one of the first literary agencies in Paris--which functioned as a bridge between France and America for many literary figures, including James Joyce, Henry Miller, and Gertrude Stein. In her paper, Dr. Cossu-Beaumont highlighted the double role that Jenny Bradley played in the agency's business dealings and in the agency's intertwined social functions, such as the Friday receptions that served as something of a literary and artistic hub for American expatriates and French writers alike.

After lunch, we had two more papers. The first, by Elizabeth Shand (UNC-Chapel Hill) argued for a re-examining of the relationship between written and published texts by examining Sara Coleridge's Pretty Lessons in Verse for Good Children  and Phantasmion. Elizabeth demonstrated that, in both texts, the hand-written text (or hand-written annotations in the printed text) revealed a side of Sara Coleridge that was otherwise obscured in the printed volume. This was followed by Dr Anna Lanfranchi (University of Machnester) and her study of Berta Cutti and the Society of Italian Authors. I was particularly interested in Cutti's dislike of overly commercial terms to describe her work, which also highlighted the social role played by literary agents.

The final conference panel featured a paper by Dr. Amy Clements about finances, class, and Alfred A. Knopf Inc. Dr. Clements started by subverting the common narrative about Samuel Knopf's role as financial benefactor to Alfred and Blanche Knopf by highlighting his spendthrift habits. She concluded her paper by asking some compelling questions about the role that class may have played in the relationship (or, perhaps more aptly, the lack of a close relationship) between Blanche Knopf and Virginia Woolf.

The conference concluded with a round-table by the Harry Ransom Center's graduate research assistants, who discussed the display that they put on for the conference, titled "'Shall I get it'? Women in Transatlantic Publishing in the Harry Ransom Center's Collections". The final panel really highlighted the breadth and depth of the HRC's collections when it comes to women in publishing, including Blanche Knopf, Jenny Bradley, Idella Purnell Stone (Palms Magazine), Allanah Harper (Echanges: A Quarterly Review of Literature in English and in French), and Marguerite Caetani (Botteghe Oscure), just to name a few.

With that, MAPP's two-day visit to the Harry Ransom Center came to an end. Many thanks again to Jim Kuhn, Kristen Wilson, Adrienne Sockwell, Kayleigh Voss, and Hartlyn Haynes and the fantastic HRC staff for their work in putting the workshop and conference together!

Talks are now available to watch on YouTube via our MAPP Publications page. 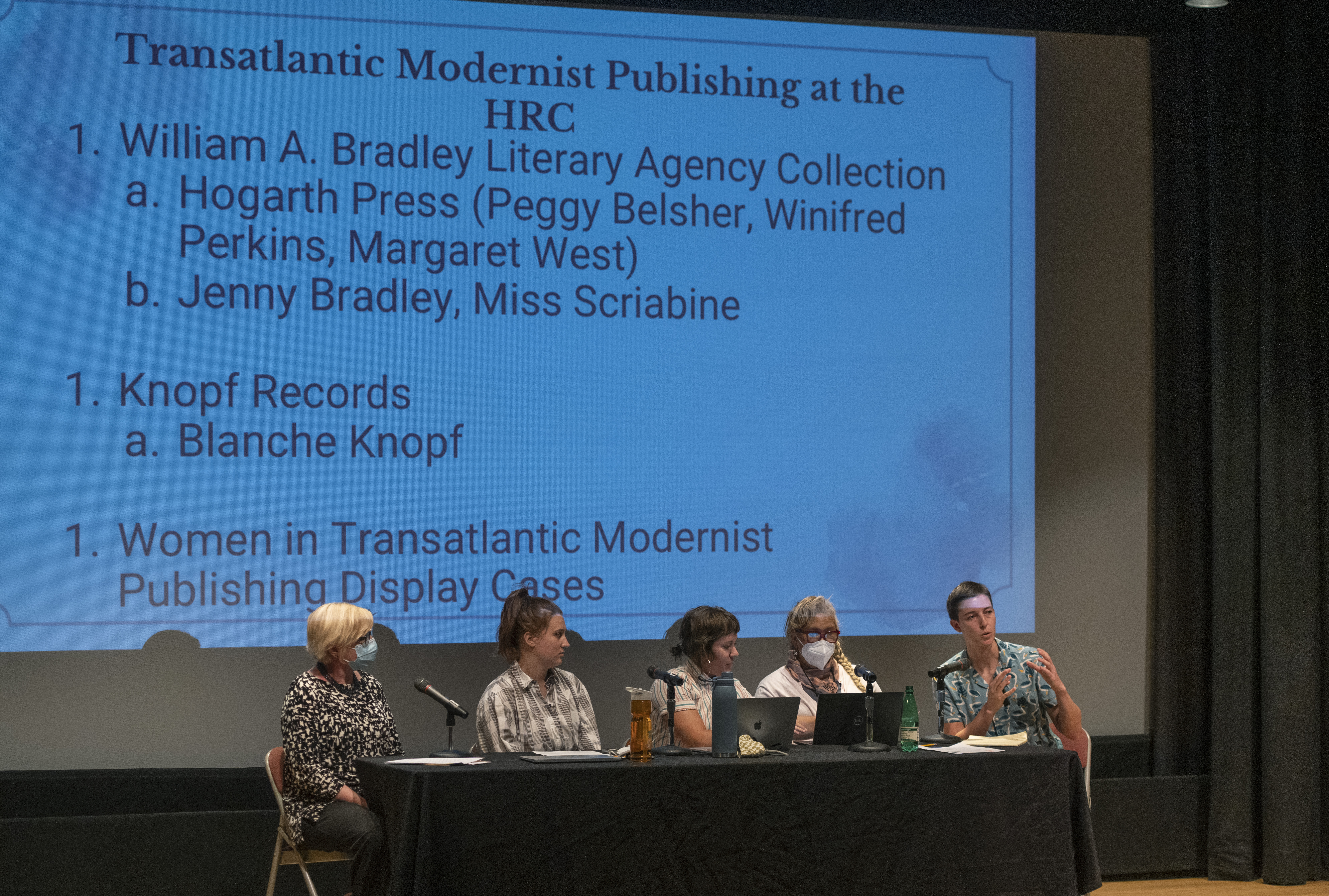