Dust jacket of "Change Your Sky" by Anna D. Whyte

Little is known about the personal life of the enigmatic author Anna D. Whyte. Believed to be born in 1909 in New Zealand, many of her early and later years remain a mystery. Helga Kaschl has found evidence of Whyte at a girl's college in Wellington, the recipient of an award for her outstanding French, and then studying English Literature at Newnham, graduating in 1930 or 1931, at which point she moved to Highgate.   Bloomsbury friend Pernel Strachey was Newnham principal during the period that Whyte studied there.  It is possible Strachey introduced Whyte to the Woolfs.  It is also possible that Whyte attended Woolf's Newnham A Room lecture in 1928.

Virginia Woolf notes in her diary on October 30th, 1935, when Anna Whyte comes for tea, that Whyte’s father was a doctor in New Zealand and Whyte spent most of her young adult life travelling the world aboard cargo ships with her family (Woolf 349). One such journey was taken in 1935 when the 26-year-old Whyte, her sister, and her mother boarded a ship set for England (Ancestry). This voyage took place the same year that two of Whyte’s books, Change your Sky and Lights are Bright, would be published by the Hogarth Press, thus introducing Whyte to the circle of Leonard and Virginia Woolf.

While Anna D. Whyte only published two known novels and submitted a few (now-lost) pieces to newspaper competitions (Bookman), her work was widely reviewed and praised (Plomer 34). Her first novel, Change Your Sky, was written as a study of human behaviour, a theme Whyte would continue to explore in her second novel. Change Your Sky, depicting a group of people traveling to Florence from England in hopes of gaining different perspectives about life, was regarded by many contemporary critics as an excellent first novel with a “clever plot” (Aberdeen Press 2). The Courier and Advertiser newspaper categorized Whyte’s first novel as “something really fresh in fiction — a brisk, sensible, and not improbabl[e] story.” The style of her writing was thought to have been partially inspired by Virginia Woolf. Citizen, a newspaper in Gloucester, England, wrote: “She writes a good style, not unflavoured by Virginia Woolf, but when she is sentimental she is diffuse” (5). The dust jacket for the novel is the sketch of a picturesque Italian landscape and was designed by Virginia Woolf’s sister, Vanessa Bell. (University of Toronto Libraries).

Lights are Bright, Whyte’s second and last novel, was published by the Hogarth Press in 1936. The story follows the exhilaratingly dangerous ocean travels of a young female protagonist who is sailing to pursue the man she believes she loves, only to fall in love with one of the male passengers aboard her ship. Presumably due to her own experiences with travel, Whyte is perceived by critics to be “in her element, both when she is describing the beauties of the tropic sea and sky, and when she is handling her dialogue, which is witty and has also a hint of depth” (The Evening Telegraph and Post 7) Vanessa Bell also designed the dust jacket for this novel (University of Toronto Libraries).

Many of the details of Anna D. Whyte’s life remain unknown, but the praise she received for her novels presents the life of a well-travelled woman, determined to understand and represent diverse interpersonal relationships.

“Among the Latest Books.” The Evening Telegraph and Post, p. 7. British Library Newspapers. 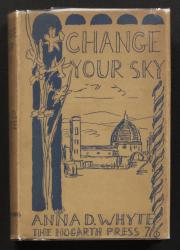 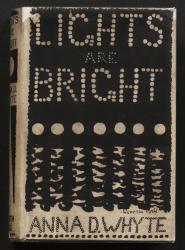