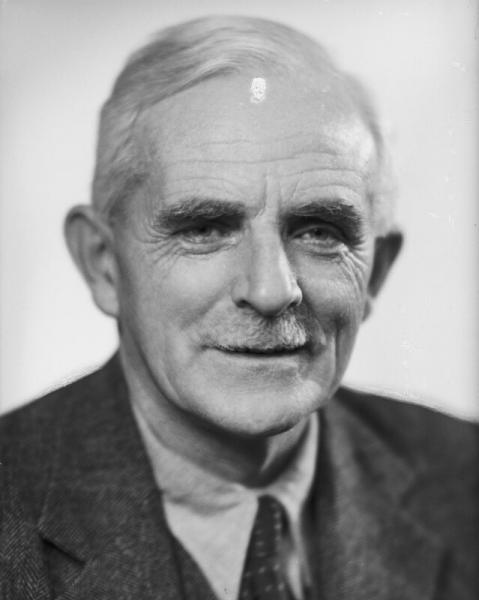 made available with an Attribution-NonCommercial-NoDerivs 3.0 Unported (CC BY-NC-ND 3.0) licence  https://creativecommons.org/licenses/by-nc-nd/3.0/legalcode

Sidney Barrington “Barry” Gates was a scientist, an artist, a father and a friend. During his lifetime he wrote over 150 journal articles in the aerodynamic field, multiple collections of poetry, short plays, and contributed to various magazines as a book critic. He did not just excel in one area of his life, but all of them. He was continuously described as a kind and loyal friend who always put others first, which is no surprise when looking at his areas of research in pilot safety and plane stability. He is also remembered as an extremely intelligent and creative man, who had an elegant way with words. Torn between a love of literature and mathematics throughout his life, he made lasting contributions to both fields. His writing could range from poetically describing the human experience and its trials and tribulations to creatively solving the aerodynamic fields next big issue. Barry Gates was born in Watton, England in 1893 to Ernest Edwin Gates and his wife, whose name is unknown. The two had three children, Barrington, and two younger daughters. His father was a respected banker at Barclays Bank in the small market town of Watton. There is not much writing from Gates’ own autobiography or other biographies about his life that includes his younger years, however, it is known that he lost his mother at the age of eleven. Following the death of his wife Gates’ father, Ernest, and his three children relocated to Norwich, where Ernest Gates received a job at the head office of Barclays Bank in Bank Plain, Norwich (Boyles 181). This move led to the beginning of Gates' education at Higham Grammar School. In school, Gates excelled in academic as well as athletics. Although he suffered from a stutter, this did not stop him from pursuing his education. His teachers noticed his affinity for mathematics and masters of the subject took him under their wing. Gates says in his unfinished autobiography, “Mathematics is unique in its impact on the young. You either muddle along for a time with a lot of nonsensical ideas about how you are meant to use it, then give it up, or you suddenly see the light, after which you are alright, or at least as right as your intellectual capacity will allow” (Boyles 182). This natural ability, as well as his love for math, propelled him to excel in his examinations from the newly renamed The City of Norwich School. He received top honours in his exams and earned a scholarship to Corpus Christi College, Cambridge in 1911. He chose to pursue a degree in mathematics, however, he says that “but for the urging of his schoolmasters he himself would have opted for an art subject” (Boyles 183). Gates’ love of words and literature and his abilities in the sciences continued to be in constant competition throughout his life.

Gates thoroughly enjoyed his time at Corpus Christi, stating in his autobiography that his “years at Corpus lifted me into a happiness I had never known in my childhood and have rarely known since” (Boyles 183). He thrived in an academic setting with his peers going after the same things he was. He revelled in the thought that there were infinite possibilities for where his life could take him. To him, academics were a place where people young and old could come together in the search for truth and knowledge, a place where people were eager to learn from one another as well as from themselves. Following examinations from Corpus Christi, he was awarded a Wranglership (otherwise known as highest honours at Cambridge). While his courses at Corpus Christi College were strictly mathematics and science related, he received a college prize for exams and chose to works of English writers and poets such as Christina Rossetti, Robert Browning, William Blake, Francis Thompson, Alice Meynell and William Ernest Henley as his reward. It’s evident that these artist’s romantic and devotional poetry had a large impact on his own poetry and further propelled his interest in the literary arts. As most other young men did after university, Barry Gates joined the army following graduation from Corpus Christi in 1914. However, this was one aspect of his life that he did not excel in or enjoy, stating “after looking at my puttees and certain other aspects of my military bearing under training, the Army came to the correct decision about me: This man is no good for us. Let him go do the sums he is said to be good at”. In 1915 he was offered employment at the Royal Aircraft Factory (now known as the Royal Aircraft Establishment). He was recruited by the Chief Engineer F.M. Green who noticed his huge capabilities for math and saw potential for what he could do for the aerodynamic field. Through the R.A.F, Gates was introduced to many intellectuals in the same field that helped drive him into the field even more. Names such as Geoffrey Taylor, Hermann Glauert and Frederick Lindemann, were great friends of his who all went on to accomplish great things in the physics and mathematics fields as well (Boyles 184). It was in this academic setting that Barrington Gates thrived and could fully explore the furthest reaches of his imagination and intellect in solving the next big problem in-flight safety. While aerodynamics may have taken over the majority of his adult life, Gates also explored his love of poetry in his younger years. His literary career began by having selections of his poems published in magazines such as Windsor Magazine, The Westminster Gazette, and The New Witness. Following the success of these selections, B.H. Oxford published Barrington Gates’ first whole collection of poetry in 1918, which is entitled Cargo. Cargo had two major themes: the anguish and loss that comes along with war and death, and the beauty and healing powers that nature holds. This beautiful contrast is a common theme seen throughout his collection of poetry. The loss of his mother at a young age and his own short experience in the army seems to be the origin of his poetry about loss and bereavement. Working with the R.A.F. also led to a few poems being written about airplanes and their pilots, though this is only a small percentage in his collection. In these, he mainly focuses on the relationship between plane and pilot. With his focus on pilot safety and stability, it’s no surprise that his poetry also shared this devotion.

Cargo was not the beginning and end of his literary career. In 1925, Leonard and Virginia Woolf’s Hogarth Press published a collection of his poems entitled Poems. The total number of copies sold is unknown, however by January of 1926, over 60 copies had been sold of this collection (Woolmer’s Checklist). While not widely successful, certain selections from this collection were also printed in magazines such as The London Mercury, The New Statesman, The Nation and the Athenaeum, The Westminster Gazette, The Poetry Review and The New Highway. This collection of poems focuses more on the human experience and emotions while intertwining the importance of nature. Growing up, Gates and his two sisters spent holidays at their paternal grandparents' house. Their grandfather had a large conservatory and greenhouse, which sparked Gates’ own love of gardening and experiencing the outdoors. Gates’ expressive use of nature in the poem “Abnormal Psychology” from Poems demonstrates this love: With all that’s brave beneath the sun, With lovers’ singing, and tall great trees, And the white glory of morning seas. Wilson 5 what of this silence, so there stay, Child’s laughter to the end of the day? And what of dark, if on the hill Eve is burning opal still? Poems was the last collection of poems that Gates published, but he went on to write a series of short plays entitled The Mulligatawny Medallion in 1926. This seemed to be the end of his career as a poet. However, he went on to write as a book critic for magazines like The Nation (192328), The New Statesman (192545), and The Times Literary Supplement from 1928 until almost the end of his life. While he had a short career as a poet and playwright, his love for the subject did not fade. In addition to all of the commitments that came along with his career in the aerodynamic field, he still found time to write for magazines on the side and keep up with new works by authors in England. Sidney Barrington Gates thrived in any academic setting. Whether it was writing research for scientific journals or his own poetry, his mastery of words shone through in everything he did. The Hogarth Press represented a great starting point for many new and unknown authors, and this was no different for Gates. While his poetry was not widely distributed or known, the impact he had in the scientific world was partly due to his presence in the literary world as well. He is remembered as a good-natured man, who lived his life to further improve others’ through his research and poetry. 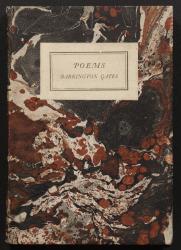