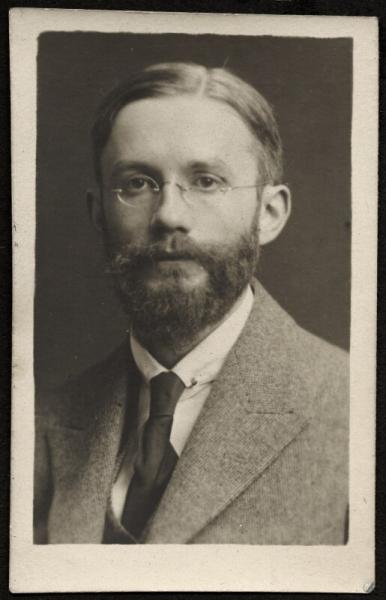 Journalist, psychoanalyst, translator, and member of the Bloomsbury Group, James Beaumont Strachey was born to Sir Richard and Lady Strachey on 26 September 1887 as the youngest of thirteen children. To date he remains at best a marginal presence in most accounts of the Group, overshadowed by its more fêted members, including his own siblings, Lytton and Phillipa.

The young Strachey is frequently portrayed as a shy and listless youth, whose “persistent procrastination and a lingering indecisiveness” condemned him to a lacklustre performance at Cambridge, where he was an undergraduate from 1905 to 1909 (Nobus 2). During this period, he was part of “The Apostles”, the underground Cambridge brotherhood whose other famous members included Leonard Woolf, Lytton Strachey, and E. M. Forster. The seeds of Strachey’s future calling as a psychoanalyst were sown during his undergraduate days when he was first exposed to Sigmund Freud’s ideas through F. W. Myers and the Society for Psychical Research. Following his direct encounter with Freud’s writing in 1912, he continued his immersion in the emerging science of psychoanalysis throughout the First World War and resolved to be an analyst by 1917 (Forrester 523; 525). Meanwhile, Lady Strachey was increasingly concerned that James was beginning to mirror his elder brother Lytton’s irresolute approach to a career. She thus intervened and secured him employment as a journalist and book reviewer for The Spectator, a newspaper run by his cousin, St. Loe Strachey (Caine 257).

Strachey’s fluid sexuality over the course of his life was in keeping the Bloomsbury ethos of sexual dissidence and its retrospective evaluation as a ‘queer’ subculture [Helt and Deltoff (2016)]. His famously unrequited pursuit of Rupert Brooke at Cambridge, in addition to his rumoured relationships with Duncan Grant and John Maynard Keynes, was followed by a brief entanglement with Noel Oliver. He finally married Alix Sargant-Florence in 1920, and the couple became established occupants of 41 Gordon Square, today a property of the University of London (Forrester 610). The Stracheys both commenced their psychoanalytic journey later that year as they made their way to Freud’s couch in Vienna. Their analyses only lasted two years, after which James returned to London while Alix became Karl Abraham’s analysand in Berlin. Given that neither of them was medically trained—James having fled medical school after just two weeks—they became two of England’s earliest “lay” analysts in 1922. Adrian and Karin Stephen (Virginia Woolf’s younger brother and sister-in-law) would eventually join them as the other pair of Bloomsbury psychoanalysts.

Strachey was spurred on his lifelong métier as a translator during the brief analysis with Freud, when the latter requested that he and Alix translate “Ein Kind Wird Geschlagen” [“A Child is Being Beaten”] into English in 1921 (Silver 199). In the years that followed, the pair shared the turf with fellow English and American psychoanalysts (e.g. Joan Rivière and A. A. Brill), who were independently translating Freud’s individual writings. By 1948, however, the Publications Committee of the British Psychoanalytical Society had unanimously agreed on Strachey as Freud’s “official” English translator (King ix). It came as no surprise, then, that when a full English translation of the entirety of the Freudian corpus was first mooted during the 1956 Centenary celebrations, Strachey was the uncontested choice for the role of the General Editor.

In recent years the Bloomsbury Group’s collaborative translations (e.g. Virginia Woolf’s and S. S. Koteliansky’s Dostoevsky translations) have attracted considerable scholarly interest [Davison (2014)]. Freud’s Standard Edition can be seen as yet another instance of an endeavour that forged collaborations both within and outside the Group. While major decisions concerning the selection of Freud’s texts, their organization, and the glossary of technical terms were taken by Strachey, he was generously assisted in this herculean task of publication and translation by Alix Strachey, Anna Freud, Alan Tyson, Angela Richards, and finally by Leonard and Virginia Woolf, his publishers. The Hogarth Press released 24 volumes of the Standard Edition over a thirteen-year period from 1953 to 1966. A Revised (and expanded) Standard Edition, largely based on Strachey’s original translations, is being published under Mark Solms’s editorship in 2018.

Strachey’s spectre has inevitably risen from (ostensible) oblivion each time the vexed question of Freud’s English translations has come up for discussion in the 20th and 21st centuries. A polarizing translator, he has either been treated as whipping boy, roundly taken to task for his medicalization and Latinization of Freud’s “everyday” German vocabulary [Bettelheim (1983)], or commended as a robust translator whose occasionally infelicitous English renditions resulted from the competing demands of a simultaneous fidelity to German and English [Solms (2018)]. Amidst this ongoing debate, it is crucial not to lose sight of Strachey’s original editorial apparatus in the Standard Edition, as part of which each Freudian text—regardless of its importance within the canon—is preceded by a Translator’s Preface containing important contextual commentary, a discussion of textual variants, the work’s publication history in English and German, and occasionally even a reflection on translational choices. This, in itself, is the product of a lifetime’s work without which many an Anglophone reader of Freud would be at sea. It is only once we turn to archival traces of Strachey’s work on the Freud translations (documented, for instance, in his personal papers held by the British Psychoanalytical Society) that we begin to discern the considerable hurdles that he was up against, not least “Freud’s completely unbusinesslike handling of the copyrights in his translations”, alluded to in his ‘General Preface’ to the Standard Edition. The Strachey who emerges from his tireless correspondence with Leonard Woolf or his psychoanalytic colleagues is an irascible, sharp-tongued and overworked man, whose commitment to disseminating Freud’s word nearly blinded him and eventually demanded the relinquishing of his own psychoanalytic practice to finish the project within his lifetime. Strachey was honoured with the Schlegel-Tieck Prize in 1966, awarded to an outstanding full-length translation of a German-language work into English.

Strachey’s work on the Standard Edition can occasionally obscure his two distinctive contributions to psychoanalytic theory and technique from the 1930s. “The Nature of the Therapeutic Action of Psycho-analysis” (1934) remains one of the most-read papers on clinical technique of all time, in which Strachey theorized the “mutative interpretation” and its careful formulation by the analyst, so that it did not overwhelm (or underwhelm) the patient with the picture of her internal psychodynamics. It also comes as no surprise that, as a member of the Bloomsbury Group with marked literary proclivities, his earliest paper was devoted to exploring the infantile libidinal roots of reading activity. In “Some Unconscious Factors in Reading” (1930), Strachey contended that popular and highbrow writing mobilized two distinct stages of oral eroticism; overlooked by literary studies on the whole, scholars are finally beginning to return to this paper for its suggestive account of the erotics and pathologies of reading literature [Tyson (2017)].

James and Alix Strachey also played a pivotal role in the growth of child psychoanalysis in England in more ways than one. On the one hand, they translated Melanie Klein’s writings and assisted her move to London (Abel 9), while on the other, James became Donald Winnicott’s training analyst of ten years, facilitating the latter’s famous progress “through paediatrics to psychoanalysis”. Strachey died of a heart attack in April 1967 and was survived by Alix until her passing in 1973. In Winnicott’s famous obituary, James Strachey is remembered as “[his] favourite example of a psycho-analyst”: “not a great man”, but one “who was so infinitely enriched by what he had gathered in from the cultural inheritance that he did not depend on distractions for feeling glad to be alive” (127).

James and Alix Strachey Collection (P-17: A to G), Archives of the British Psychoanalytical Society (Institute of Psychoanalysis, London).

Abel, Elizabeth. Virginia Woolf and the Fictions of Psychoanalysis. University of Chicago Press, 1989.

Strachey, James. “General Preface”. The Standard Edition of the Complete Psychological Works of Sigmund Freud. vol. I. Hogarth Press and the Institute of Psychoanalysis, 1953. 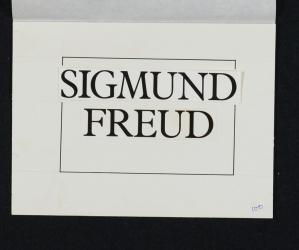 The standard edition of the complete psychological works of Sigmund Freud

Group Psychology and the Analysis of the Ego 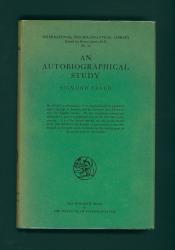