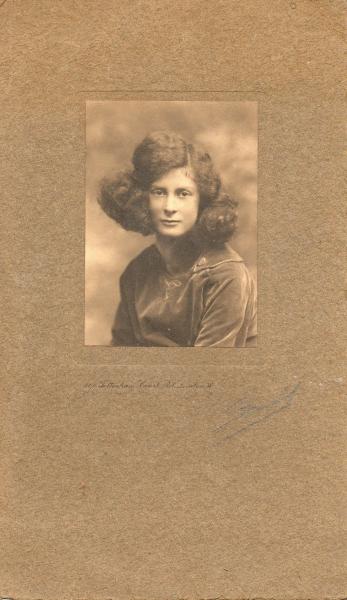 Francesca Allinson (known as Fresca) was born Enid Ellen Pulvermacher Allinson in 1902.  She was the fifth child of early whole foods advocate Dr T.R. Allinson and German Jewish artist Anna Pulvermacher.  Allinson's oldest brother, Adrian Allinson, was a Slade Art School trained artist and a member of the London Group.  Adrian Allinson was a contemporary of Mark Gertler, Stanley Spencer and C.R.W.Nevinson.  Allinson was educated at home, at an alternative school run by theosophists and then briefly in London before going on to complete her degree at Lady Margaret Hall in Oxford (between 1924 and 1928).

The Hogarth Press published Allinson's semi-autobiographical A Childhood in 1937.  She came to the press via Alice Ritchie, sister to Trekkie Ritchie Parsons and herself both a worker and an author at the press.  Allinson knew Ritchie through designer Enid Marx whom Allinson subsequently brought to the press as the designer of her cover and chapter heading woodcuts.  Marx went on design a number of covers for the Hogarth Press.

Writing was not Allinson's major preoccupation.  A talented musician, composer and choral conductor, Allinson worked in the fields of folk song and puppetry.  Along with collabroator Herbert Just, she published editions of Purcell and Orlando Gibbons.  Her unpublished manuscript on the Irish origins of English folksong is held at the Vaughan Williams Memorial Library.