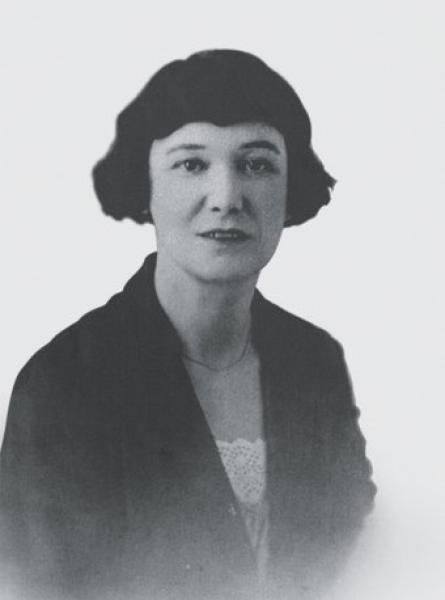 Few people know of Beatrice Hastings today, although she was one of modernism’s most complicated and memorable figures. Born Emily Alice Beatrice Haigh in London, the seventh child of John Walter (a merchant and wool trader) and Catherine Jane (colonial-born), “Bea” grew up in Port Elizabeth, South Africa. She enjoyed a relatively idyllic childhood, although witnessing her mother’s ongoing care for 16 children impressed upon her the horrors of maternity and helps explain the vitriol with which she addressed marriage and motherhood in her later writing. As was common for English children growing up in South Africa, Hastings was sent to an English boarding school outside the town of Hastings, England at the age of 12—perhaps a source for her assumed name (Gray, Free-Lancers 71; Meyers 136).

After her return to South Africa, 18-year-old Hastings married Edward Tracy Chamberlain in 1897, in a desperate bid for freedom. The marriage was not a happy one, and he died soon after of a heart attack (Gray, Beatrice Hastings 136). Hastings then traveled with the boxer Lachlan Thomas, possibly marrying him, as his name appears on her death certificate (Gray, Beatrice Hastings 108). While biographical details of this time are scant, we know she gave birth to, and lost, a child in these years (Gray, Beatrice Hastings 136). In 1906, Hastings resurfaced in London and met Alfred Richard (A.R.) Orage, who in 1907 assumed editorship of the New Age—a progressive weekly review of art, politics, and literature. Orage and Hastings were editorial and romantic partners for the next seven years.

While Orage is celebrated for editing the New Age, Hastings was undoubtedly “second in command” in charge of literary content, a “de facto assistant editor” (Gray, Beatrice Hastings 178, 189). From 1907-1920, Hastings produced a torrent of copy for the New Age, appearing both anonymously and under at least 15 pennames (likely more). Her labyrinthine use of pseudonyms contributes to her marginal status in contemporary modernist studies, as it is nearly impossible to track everything she authored. Stephen Gray’s biography of Hastings, which is currently out of print, lists every known piece Hastings authored for the New Age together with the date of publication and the pseudonym employed.

During her time with the New Age, Hastings claimed that she, not Orage, chose to publish both Katherine Mansfield and Ezra Pound (Hastings, The Old ‘New Age’ 152-153). Hastings formed an intense friendship and mentorship with Mansfield, training her as a writer and becoming her “most important ally” (Gray, Beatrice Hastings 205). Chris Mourant suggests that Mansfield adopted Hastings’ “elliptical, broken style” (108) while Louise Edensor describes their relationship as “symbiotic” but one that “invoked a mutually detrimental” result (25). Hastings’ complicated, decade-long relationship with Mansfield is often overlooked in extant scholarship, although notable exceptions include Lee Garver’s “The Political Katherine Mansfield” and Carey Snyder’s “Katherine Mansfield and the New Age School of Satire,” both of which deal with the Mansfield-Hastings relationship.

Hastings delighted in the insouciant rhetorical affordances of journalism and in the hybridity of her shifting, voluble personas. As Sunny Stalter-Pace maintains, “Her polyvocality suggests that we need new frameworks for understanding authorial voice” (208). Hastings also specialized in creating controversy where there was none, often writing a letter and then criticizing that same letter under a different pseudonym—in this way, selling copies of the New Age (Gray, Beatrice Hastings 160). Her more advanced pennames developed their own unique personalities: the “coolly rational” D. Triformis attacked women’s suffrage, while “firebrand” Beatrice Tina blasted the prison of maternity and women’s division among themselves (Snyder, “Sparring Pseudonyms,” 172). In all, Hastings published three books, eight short stories, 30 sketches, 38 poems, 68 hybrid journalistic accounts of Paris in wartime, and a torrent of articles, letters, reviews, columns, and parodies in the New Age. Many of Hastings’ pieces are hybrid forms that incorporate bricolage and pastiche, thus transcending definition. Her most notable works include parodies of Ezra Pound (1913), which Ann Ardis analyzes; Whited Sepulchres (1909), a novella which details women’s ignorance of marriage and maternity; The Maids’ Comedy (1910-11), a satirical romance featuring two “damsels errant,” based on Hastings and Mansfield (Gray, Free-Lancers 66); and Pages from an Unpublished Novel (1912), a semi-autobiographical piece that blends fiction and non-fiction. Hastings also published the slim pamphlet Woman’s Worst Enemy: Woman (1909), which attacks women for their complacency in accepting the atrocity of maternity.

As her relationship with Orage cooled, Hastings was dispatched to Paris in 1914 where, as Alice Morning, she penned her extraordinary “Impressions from Paris” column in the New Age from May 1914 to November 1915. These pieces showcase Hastings’ unique blend of “journalistic reporting and fictional creativity” (Edensor 31) and are considered by many critics to be among her finest and most important work (Scholes; Carswell 93; Edensor 32; Gray, Beatrice Hastings 272). In Paris, Hastings was introduced to prominent bohemian circles by the poet Max Jacob, becoming the lover and muse of the turbulent painter and sculptor Amedeo Modigliani from 1914-1916. If she is known today, it is often as “Modi’s” lover or as the subject of 17 of his paintings hanging in art galleries around the world—such as Madame Pompadour (1914), Beatrice Hastings in Front of a Door (1915) and Beatrice Hastings with a Mauve-Checked Blouse (1916). Her unpublished French novella Minnie Pinnikin, written during this time, is a surrealist account of Hastings’ and Modigliani’s relationship. Excerpts are reprinted in Modigliani and the Artists of Montparnasse (2002). Hastings also translated Max Jacob’s poems into English during these years (Gray, Beatrice Hastings 329-330).

Cut off by Orage from the New Age, Hastings’ last piece therein appeared in 1920. In the 1920s, her health began to decline while her interest in theosophy and automatic writing grew. By 1931, Hastings had returned to London and was personally helping to staff and manage the London Theosophy Center. She wrote several articles in defense of theosophy, publishing Defense of Madame Blavatsky in 1937 via the Hastings Press, which she ran in her home, and Solovyoff’s Fraud serially in The Canadian Theosophist (1943-1944). During these later years, even while severely ill, she independently wrote and published several short-lived magazines: The Straight-Thinker in 1932, The Straight-Thinker Bulletin in 1932, The Straight Thinker: A Literary and Modernist Review in 1933, and, both intermittently, New Universe, 1937-1939, and The Democrat, 1938-1943. Madame Six, an account of her 1920 hospitalization which Stephen Gray declares her “masterpiece” (Free-Lancers 69) appeared serially in the Straight-Thinkers in 1932-33. She also published lesser works in the 1930s, most serially in her magazines, including The Picnic of the Babes in the Wood (1932-33), Theresa Martin Reviewed (1932), In the Bud (1935), and the slim The Old ‘New Age’: Orage and Others (1936). In the latter, she attempts to salvage her “unknown” reputation by clarifying that she was the “sub-editor” of the New Age and is the “victim” of “a literary boycott that does, or should, matter to every reading person” (Hastings, The Old ‘New Age’ 148). Suffering from acute gastroenteritis pain that she believed to be cancerous, Hastings killed herself with gas in October 1943 at the age of 64.

The years have not been kind to Hastings. She was a fierce woman bursting with strong opinions and chaffing at the stifling gender norms of her milieu, declaring herself “the only woman in England who does not want a family” (Hastings, “Women and Freedom” 58). Instead, she wanted art, passion, adventure, sex, literature—the very things her male counterparts desired. She wore compelling clothing, had a penchant for drinking and smoking, was brazen and brash, took many lovers, and was unapologetic about her singular devotion to her craft. She helped shape modernism by publishing Pound and Mansfield, co-editing the New Age, inspiring Mansfield and Modigliani, first praising Modigliani in print (Meyers 146), introducing Max Jacob’s poems to the English world, and serving as the model for a number of modernist characters, including Mrs. Harrowdean in H.G. Wells’ Mr. Britling Sees it Through (1916), and Beatrice in Mansfield’s “Poison” (1920). She pioneered a “woman’s way of writing” (Gray, Beatrice Hastings 165), anticipating Virginia Woolf’s plea in A Room of One’s Own (1929) that women shape the sentence for their own means. Writing as “Alice Morning,” she even published what may be the first piece to self-designate as “modernist” (Babbie 237)—a short piece entitled “Modernism” in 1912. Nevertheless, Hastings is often excised from the story of modernism, relegated to a footnote, or unjustly chastised. Peter Washington claims that Hastings “suffered from delusions of literary grandeur” (203), while Jeffrey Meyers repeatedly calls her “wild,” a “sexual juggernaut, physically aggressive and determined to take her pleasure in the same way as a man” (137). John Carswell laments that Hastings experienced a “pathetic descent into craziness” (273). More recent scholarship, such as “Debating Suffrage” by Snyder, attempts to reclaim Hastings’ legacy, rightfully positioning her at the epicenter of English and French modernist culture.

Wallace Martin. The New Age Under Orage. Manchester UP, 1967.

Washington, Peter. Madame Blavatsky’s Baboon: A History of the Mystics, Mediums, and Misfits Who Brought Spiritualism to America. Schocken Books, 1993.

In Order of Publication:

The Straight-Thinker Bulletin, edited by Beatrice Hastings. London, The Hastings Press, May 1932-Aug/Sept 1932.

The Straight-Thinker: A Literary and Modernist Review, edited by Beatrice Hastings. London, The Hastings Press, 1933.

Madame Six: An Englishwoman in a French Hospital (unsigned). The Straight-Thinker, 1932-1933.

In the Bud: Reminiscences of Fifty Years Ago. The Port Elizabeth Advertiser, 1935.

The Democrat, edited by Beatrice Hastings. London, The Hastings Press, 1939-1943.

Our Own Business. London: The Hastings Press, 1938.

Solovyoff’s Fraud: Being a Critical Analysis of the Book A Modern Priestess of Isis, translated from the Russian of Vsevolod S. Solovoff by Walter Leaf. The Canadian Theosophist, 15 July 1943-15 Feb. 1944. Reprinted by the Edmonton Theosophical Society, Alberta, 1988.