Richard Kennedy was sixteen when he started working at the Hogarth Press in 1928. He had come straight out of Marlborough College, having failed to pass the exams that would have allowed him to stay. Kennedy came from an upper-middle class background, and his employment at the Press was the result of family connections. His uncle was the artist and architect George Lawrence Kennedy, and both he and Leonard Woolf were members of the Cranium Club.[1] Knowing that Woolf was in need of an apprentice publisher, Kennedy offered his nephew as a potential candidate. The Cranium Club was not the only link between the two families; Virginia Woolf’s childhood holiday home, Talland House, had been owned by the Kennedys, who leased it to Woolf’s father between 1881-1895.

Kennedy had numerous responsibilities at the Press. It was his job to keep count of the packages that came from the binders, package books for distribution, sell books to ‘bagmen’ (booksellers who bought directly from the publisher), assist with printing, and design book covers. He also had to act as a travelling salesman for the company, taking the books to publishers outside of London. When a previous employee of the Press, Francis Birrell, knowingly asked Kennedy whether he was a ‘factotum,’ Kennedy had to agree that he was. ‘More totem than fact,’ Birrell quizzically replied.[2]

Kennedy made a lasting contribution to the Press’s legacy in the form of his cover designs. There were at least seventeen identifiable artists who designed book jackets for the Hogarth Press, and of these only Vanessa Bell, E. McKnight Kauffer, Richard Kennedy, Trekkie Ritchie Parsons, and John Banting were asked to create more than two covers.[3] Kennedy’s first effort was a pictorial design for Death of My Aunt by C.H.B. Kitchin (1929), and his second was for Wilfred Benson’s Dawn on Mount Blanc (1930). His cover for Benson’s book consisted of a bold, geometric design, with the title and author’s name placed inside a diamond shape. Leonard liked it enough to use it on a further twenty-two books, including his own, After the Deluge: A Study of Communal Psychology, Volume II (1939). Kennedy was also entrusted with the covers for the uniform edition of Virginia Woolf’s works, although this task was later completed by Vanessa Bell.[4] The final cover that Kennedy designed and which went to print was a pictorial design for Thomson C. Patrick’s Adventures in Investing (1936). This was presumably completed as a lone commission after he left the Press in 1930. In total, his designs were used for twenty-four books printed by the Press.

Unlike other employees, such as Miss Belcher and Mrs Cartwright, Kennedy was included in the Woolfs’ social circle. They invited him to supper and social events, and he went to visit them at their home in Rodmell. Kennedy had a high opinion of the Woolfs, although he was aware of their faults. He envisaged Leonard as ‘the magician who [kept] us all going by the strength of his will – like the one in the Tales of Hoffmann – and Mrs W[oolf] is a beautiful magical doll, very precious, but sometimes uncontrollable.’[5] The Woolfs saw Kennedy as being rather young and inexperienced. Virginia Woolf once described him as ‘the soft duckling boy, with a bill that opens wide & says ‘Quack’’.[6] It was Kennedy’s lack of experience that eventually led to him to leave the Press. Although he had a great deal of enthusiasm for the job, he often made mistakes with letters or accounts. The last straw was when he ordered the wrong size of paper for the Uniform Edition of Virginia’s works.[7] Kennedy writes in A Boy at the Hogarth Press that Leonard was in a ‘towering rage’ when he found out:

He refuses to speak to me. […] I suppose I really have got the sack. LW says I can’t be trusted to do anything but wrap up parcels and that I am the most frightful idiot he has ever had the privilege of meeting in a long career of suffering fools.[8]

Leonard was more measured when he announced the news to George Kennedy:

I am sure [Kennedy] is right to leave us in September and take a course at University College. As you know, I was always doubtful of his prospects here, and lately it has become obvious that his good qualities are not really suitable to the kind of work which necessarily falls to his share in a small publishing business.[9]

In his autobiography Leonard was more succinct, concluding that ‘Richard was too young to be a manager.’[10]

Kennedy went on to become a successful book illustrator, illustrating works by EilísDillon and Rosemary Sutcliff. He was a personal friend of the artist Stanley Spencer and lived in Maidenhead. He is best known for his book, A Boy at the Hogarth Press, which describes his years working for the Woolfs. Although the book was written forty years after he worked there, his recollections are as vivid and detailed as the illustrations he drew to accompany them. In the text, Kennedy depicts himself as a naïve but likable young man who enthusiastically attempts his work with mixed results. While it is likely that he exaggerated elements for comic effect, his writing gives a rare insight into the sights and sounds of the Press, as well as the relationships that underpinned it.

[4]Kennedy noted that Bell did a ‘very stylish typographical design for the Uniform Edition’ but that he didn’t ‘personally like her work.’ Kennedy, A Boy at the Hogarth Press, p. 45. 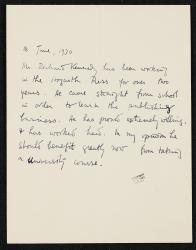