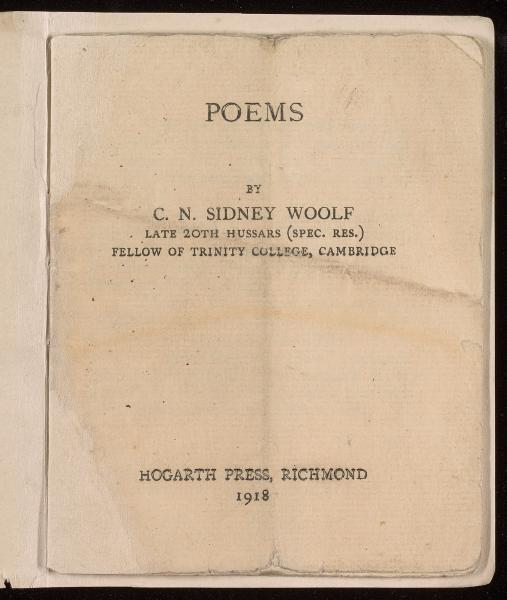 Cecil Nathan Sidney Woolf was born on September 5, 1887 in Kenley, London[1] and was the eighth of ten children[2]. His father was Sidney Woolf (1844-1892), a Queen’s Council barrister, and his mother was Marie de Jongh (1848-1939). Cecil’s family was Jewish and were a part of the Reform Synagogue on Upper Berkeley Street where his father assisted the rabbi with administration (Glendinning 10). Sidney’s success at the Bar positioned the Woolf family in the middle class until his death, which forced the family to move to a smaller house in Putney as they had lost his income (Glendinning 22). All six of the Woolf boys attended Arlington House, a boarding preparatory school in Kemptown, and after their father died, the headmaster Robert Burman allowed them to continue to attend at a reduced cost (Glendinning 25). Cecil later attended St. Paul’s School on scholarship, following in the footsteps of his older brothers Leonard and Edgar, and in 1906 Cecil started attending Sidney Sussex College in Cambridge. Cecil did very well in his studies and was described by Leonard as “a scholar, a gentle and cynical conservative” (L. Woolf 181). Like Leonard, Cecil attended Trinity College in Cambridge where he was a successful historian, receiving a fellowship there. Cecil received the Thirlwell Prize Essay in 1913 for his dissertation titled Bartolus of Sassoferrato, his Position in the History of Medieval Political Thought, which he expanded into a 400 page book later that year. Cecil and his younger brother Philip’s close relationship can be seen in Cecil’s Preface in the expanded book: “I have also to thank … my brother, Philip Sidney Woolf, who has helped me with the Index - but that is the least of the obligations which this essay owes him, but which neither he nor I would number or repay with public thanks” (Bartolus xii). The brothers also completed a translation of Stendhal’s De L’Amour, which was published in 1915 by Duckworth & Co., a publishing company belonging to Virginia’s half-brother, Gerald Duckworth.

Cecil and Philip’s shared interest in horses led them to join the Inns of Court regiment before the war and, when World War I broke out, the brothers joined the Twentieth Hussars Special Reserve Cavalry unit, in which Cecil was a lieutenant, a commissioned officer ranked below captain, of the B Squadron (“Find War Dead”). During the early years of the war, when Cecil and Philip’s regiment was stationed in Mayfield and Colchester, they would often visit Leonard and Virginia in Asheham. Though Cecil and Philip were part of the cavalry, their regiment was sent to France to serve as infantry in the trenches. In 1916 Cecil wrote Leonard, “Well, this is an odd war and an odd life! I wouldn’t have missed it for anything. It all defies description” (Glendinning 200). On November 27th, 1917 at the Battle of Cambrai in Bourlon Wood, the brothers were hit by a German shell, seriously wounding both. The regiment had been under attack all day without receiving instruction. On their left side they fought uncovered while on their right they fought alongside the Irish Guard. The ceaseless attack of shells led their major to leave the safety of the trenches and walk in the battlefield in hopes of inspiring the men to keep fighting. When the major was hit by a shell, Cecil and Philip left the trenches to bring him back to safety, but a shell exploded between them, injuring them both (L. Woolf 182, Glendinning 197). Philip was sent to recover at Fishmonger Hall, which was set up as a temporary hospital. Cecil died two days after the attack, at the age of thirty, due to the injuries he received.

Leonard and Virginia Woolf were telephoned about the news of Cecil’s death on December 2, 1917. The Woolfs put their publication of Mansfield’s Prelude on hold while they worked with Philip to publish a commemorative volume of fifteen of Cecil’s poems, which he wrote between 1909 and 1911 while at Cambridge (Chapman 77). This four inch by three inch, white, nineteen page booklet simply titled Poems, was the second publication of the Hogarth Press. Although the Hogarth Press was not intended for private publications, Poems was distributed privately rather than sold, as a commemoration and memoir of Cecil’s life (Levenback 34). Poems is now one of the rarest publications of the Hogarth Press. The Woolfs printed the booklet, with Philip helping to set the type (Willis 24), and finished publication of Poems in early April 1918 though Virginia describes in her diaries that “They’re not very good; they show the Woolf tendency to denunciation, without the vigour of my particular Woolf” (V. Woolf 124). Philip’s dedication in Poems alludes to the brothers’ close relationship and work: “Had he lived longer, some of these poems, revised and re-polished, might have appeared one day in a volume under both our names. Now that he is gone, I dedicate them, as they were left, to the memory of the dearest and bravest brother that a man was every loved by – animae dimidium meae[3]” (Spater and Parsons 102). Cecil Woolf was buried at Grevillers British Cemetery, a cemetery commemorating Commonwealth soldiers of World War I.