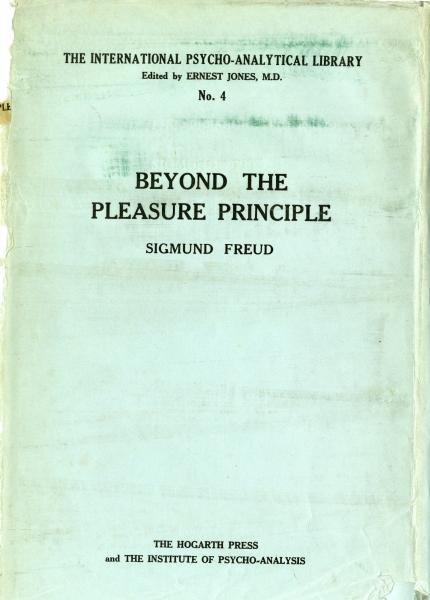 reproduced with permission from Penguin Random House Archive and Library UK, this item has not been made available through a CC By-ND-NC licence, please see our terms of use page for further detail [nid:194]

C.J.M. Hubback worked as a translator for Sigmund Freud in the 1920s. Beyond this, little else was known until recently.

Caroline Jane Mary Hubback was born on August 17, 1871 in Cheshire, England to John Henry Hubback and Mary Page Hubback (née Ingram)(“Births”). Caroline was the eldest child of the seven Hubback children and one of five girls. The children are fourth-generation descendants of the Austen family and it is through this connection that much of the current information came to light.  It turns out that Caroline Hubback is the great-great-niece of renowned British novelist Jane Austen. The Hubback family is descended from Jane Austen’s brother Francis (Pemberly.com). Caroline’s father and sister wrote a book about the Austen brothers, which she mentions in an interview about her family: “you will see that the authors of 'Jane Austen's Sailor Brothers' were my own father, John Henry Hubback – and my sister Edith” (Corder 147). John Henry Hubback and Edith Charlotte Brown (née Hubback) authored Jane Austen's Sailor Brothers: Being the Adventures of Sir Francis Austen and Charles Austen, which was published in 1906 (Pemberly.org) and is still available for purchase currently being published under the Cambridge University Press, the most recent printing taking place the fourteenth of June 2012. Unlike many of her sisters, there is no record of Caroline ever marrying and there are no known children. It would appear that she took an alternate way of life. Rather than living as if she were in a Jane Austen novel, she chose to be like Austen herself and work. Her last known publication as an author was released when she was 52 (Grinstein 935).

Caroline Jane Mary Hubback was known professionally as C.J.M. Hubback. Using only initials is a common tool, still in use today, used by women in the publishing world to obscure their gender, a modern example being J.K. Rowling. The first clue to Hubback’s gender is in an editorial preface by Ernest Jones in the translation of Beyond the Pleasure Principle where he remarks that he “revised this translation, so carefully made by Miss Hubback, several times” (Jones: “Preface” Beyond the Pleasure Principle). Hubback worked as one of seven translators for the now controversial psychologist Sigmund Freud. She was entrusted with translating Beyond the Pleasure Principle, which the International Psycho-Analytical Library published in 1922 during a time of intense creativity for Freud. The Hogarth Press later gained the rights to six of Freud’s books after “a good deal of bargaining” (Jones, 30 May 1924). The founder of the International Psycho-Analytical Library, Ernest Jones, completed the translation’s revisions and was also a close associate of Freud’s (“Ernest Jones”).

Freud’s other translators were Joan Riviere, who translated The Ego and the Id and Civilization and Its Discounts; Alix Strachey, who translated Inhibitions, Symptoms, and Anxiety; W.D Robson-Scott, who translated The Future of an Illusion; W.J.H. Sprout, who translated New Introductory Lectures on Psycho-Analysis; Katharine Jones, who translated Moses and Monotheism; and James Strachey who translated Group Psychology and the Analysis of the Ego, and An Autobiographical Study (Willis 298). James Strachey also did a translation of Beyond the Pleasure Principle and requested that the Hogarth press print his edition in the 1940s rather than Hubback’s, but the Press refused as her reprint was already in the “binder’s hands”(L.Woolf).

Jones bias towards Hubback as a translator was at odds with Freud’s own bias of James Strachey. In their letters, they discuss the publishing of not only Beyond the Pleasure Principle, but also Group Psychology and the Analysis of the Ego. For Group Psychology and the Analysis of the Ego Freud preferred Strachey despite Jones’ “praise of Miss H[ubback]” (Freud, 12 April 1921).  Freud later pointed out that on her translation of Beyond the Pleasure Principle, Hubback “could not avoid errors and serious misconceptions” (Freud, 14 July 1921). The July 14 letter also indicated that Freud was sending the Strachey’s to Jones in the hopes that he would be useful to Jones and The International Journal of Psycho-Analysis. Jones responded to the insult on Hubback by pointing out that “it was hardly fair to judge Miss Hubback’s translation from that one example, for the work was done sketchily some five years ago with no thought of publication and has never even been read through again; she has greatly improved since that time” (Jones, 10 August 1921). Despite the biases and confusion in 1920 of who would do the translation of Beyond the Pleasure Principle both Hubback and Strachey were useful to both Freud and Jones in different aspects.

In the 1920s, towards the beginning of The International Journal of Psycho-Analysis, Hubback wrote two further pieces under her known pseudonym; this was shortened in the citations of her original work to just C.J. Hubback. The first piece published by the journal in 1921 is a review of W. Deane’s “Fijian Society, or the Sociology and Psychology of Fijians” (Grinstein 935). The second piece is an abstract entitled “Applied Psycho-Analysis: F.M. Cornford The Unconscious Element in Literature and Philosophy. Proceedings of the Classical Association” published in 1923. Hubback’s abstract directly references the “Eniautos Daimon of J. E. Harrison’s researches” (Hubback 180). Jane Ellen Harrison is the famous classicist and friend of modernists Virginia Woolf and Hope Mirrlees.

It was through consultation with archivists at the Institute of Psychoanalysis that further information about Hubback has come to light. Ernest Jones notes in a letter to Otto Rank that C.J.M. Hubback is their “second best” translator at the International Psycho-Analytical Library (Jones, July 11, 1921). That being said, further inquiry into the correspondence between Hubback and Jones indicates that she struggled to find a permanent position with the journal despite the excellent work she did. Hubback offered to invest a large portion of a small inheritance into the journal in exchange for a short-term contract of two to three years (Hubback, May 18, 1922). Jones, unfortunately, denied her request stating that the £700, while useful to the journal, would be too small of a sum to be considered an investment for a contract. Jones states that he would not ask one of his friends to invest money into the journal, that it would be “utterly unfair” to Hubback due to the financial instability of the journal at the time. He continues on in the letter to say that he cannot give her false hope about a serious paid position (Jones, May 24, 1922).  C.J.M. Hubback is believed to have passed away at the age of 87 in 1959  (ancestory.ca)– the exact date is as of yet unknown.

Virginia Woolf once remarked, after the burning of so many of Austen’s papers, “our knowledge of Jane Austen is derived from a little gossip, a few letters, and her books” (134). A far more complete obscurity surrounds Austen’s great-great-niece C.J.M. Hubback. Due to the ambiguous nature of her professional name and the private life she lived, information is extremely scarce. If you have any further information on her please approach the Modernist Archive Publishing Project so that we may update our biography accordingly.

Hubback C. J. Rev. of “Fijian Society, or the Sociology and Psychology of Fijians: By

The only known archival holdings for C.J.M. Hubback are three letters of correspondence between herself and Ernest Jones. These letters are under the care of The Institute of Psychoanalysis in London, England.