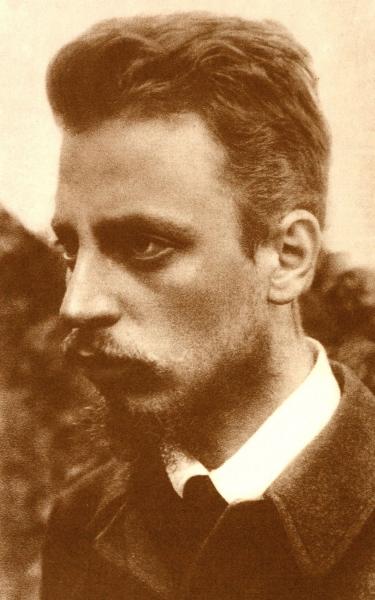 Rainer Maria Rilke was one of the most significant modernists to write in German. Born in Prague, then a part of the Austro-Hungarian Empire, he escaped the military career expected by his father and devoted himself to literature. In 1897 he met Lou Andreas-Salomé, who would be lover and mentor in his aesthetic development. The visual arts were another central influence for Rilke, and his writing was shaped by his time at the artist’s colony in Worpswede, his friendship with Rodin (whose pupil Clara Westhoff he would marry in 1901) and his fascination with Cézanne. He traveled extensively through Europe but it was in the intellectual and spiritual landscapes of Paris and Russia that Rilke found the most inspiration. His poetry was published in Germany by the Insel Verlag, who held the rights to his work in German. Rilke achieved widespread fame in his lifetime, first with the romantic prose poem Die Weise von Liebe und Tod des Cornets Christoph Rilke (1912), carried by German soldiers in World War I, as later his Duineser Elegien (1923) were to be in World War II. At the time of Rilke’s death in 1926, little of his work had been translated into English. Interest in him remained limited in England and America in part because there was no single authoritative English text upon which to base translations until the Insel Verlag release of a six-volume Collected Poetry between 1930 and 1934. A few scattered translations of Rilke into English had been made by translators such as B.J. Morse. It was the Hogarth Press, however, that first made many of his major works available to an English public, and incorporated him regularly into their publishing program. Rilke was known to be one of Leonard Woolf’s favorite poets and he was committed to translating and publishing the texts in their complete form (as issued in the German) rather than selected or abridged versions. This approach emerged not only out of the desire to provide a full representation of Rilke, but to establish the Hogarth Press as the official publishers of Rilke in English. For a time, the Hogarth Press held exclusive rights to translate Rilke’s poetry into English.

The project of publishing Rilke at the Hogarth Press began late in 1929. The Insel Verlag had granted John Linton permission to translate Rilke’s Aufzeichnungen des Malte Laurids Brigge into English with W.W. Norton as the American publisher. Linton approached Leonard Woolf to undertake a British printing and in 1931, the Hogarth Press published Linton’s translation of the text. There was much debate about what title would be most accurate and marketable; Norton initially published the work as The Journal of My Other Self (1930) but Leonard’s suggestion of the Notebook[s] of Malte Laurids Brigge ultimately became the definitive title for both English and future American editions. The same year, the Press published a translation of Rilke’s Duineser Elegien: Elegies from the Castle of Duino by Vita and Edward Sackville-West. As a limited edition, artisanal printing with a price point to match, it was an anomaly among the Hogarth Press’ hand-printed or commercially printed books. The Woolfs had not been involved in the design or printing and bore no financial responsibility; its distribution under the Press was considered a personal courtesy to the Sackville-Wests. The poor quality of the Sackville-West translation was widely criticized by scholars of Rilke, leading the Woolfs to select an academic to translate their future publications of Rilke, processes in which Leonard would be highly involved.

In 1933, J.B. Leishman, a professor of German, contacted Leonard Woolf with poems by Rilke he had translated. With the exception of the Duino Elegies, Leishman had obtained rights to publish Rilke’s poetry in English for the Hogarth Press from the Insel Verlag. The partnership with the Insel Verlag was, however, complicated by Leonard’s hesitation to engage with a German press under the Nazi regime. Unconvinced by Leishman’s arguments that the artistic and cultural value of Rilke’s works transcended political and moral concerns, Leonard considered boycotting collaboration and went so far as to write Leishman in an attempt to be released from the contract. Leonard found few supporters, however, and the publishing partnership proceeded. Leishman would become a main collaborator with the Press in the project to translate Rilke, and he turned out translations at a terrific pace. One resulting compilation Poems, released in 1934, included works from Die Frühen Gedichte (Early Poems), Das Buch der Bilder (The Book of Images), Neue Gedichte (New Poems), Letzte Gedichte und Fragmentarisches (Last Poems and Fragments), alongside German titles and cross-references to the Gesammelte Werke (Collected Works). The Hogarth Press would also go on to publish Leishman’s translations of Requiem and Other Poems in 1935, Sonnets to Orpheus in 1936 (notably featuring the original German text alongside the English translation), and Later Poems in 1938. American publishers from Norton to Houghton Mifflin turned down Leishman’s Poems and Requiem, making the Hogarth Press the sole publisher of Rilke in England and America between 1932-1938.

The next translator of Rilke for the Press became involved through an unexpected encounter. Stephen Spender, a successful poet himself, had published his own translations of Rilke (“Orpheus Euridice Hermes”) in the 1933 October issue of New Verse without legal approval by the Insel Verlag. Leonard was quick to enforce his translation rights and ensure there would be no competing English versions of Rilke’s work. The path for collaboration was smoothed by Spender’s existing relationship with the Hogarth Press as one of the modernist poets in its anthology New Signatures (1932), an initiative of Lehmann’s to identify the latest generation of writers.

The Press returned to the Duino Elegies in 1937. Robert Hull attempted to translate the Duino Elegies with the Hogarth Press but Leonard Woolf declined his overtures. Instead, the elegies were taken up that September by Spender and Leishman, with Norton’s interest in publishing the resulting work in America contingent upon Spender’s involvement, given his transatlantic popularity. Complications arose, however, between Spender and Leishman’s work schedules and, more importantly, their conflicting views on translation. In translating Rilke’s hexameter, Spender preferred an irregular meter; in contrast, the Sackville-Wests had used blank verse in their version of the Duino Elegies. Spender also favored replicating Rilke’s literal imagery whereas Leishman’s tended to paraphrase (Willis 342); “the poet argued for exactness of meaning and imagery but flexibility in verse form; the scholar argued for equivalent or paraphrased meaning and imagery but exactness in verse form.” (Willis 342-3) Collaboration proceeded smoothly only once the two men were able to meet in person. The translation was finished in 1939, and included the German text opposite the English. Leishman decided Duino Elegies would be more familiar to the English ear than the ‘Duinese Elegies,’ and his title continues to be used today. The Hogarth Press’ publications set the standard for English translations of Rilke.

While the Hogarth Press rejected a number of authors and possible translation projects, they continued to champion Rilke even when to do so was an economic risk. As Leonard explained in a letter, “there is no public of any size of Rilke’s poems in English.” (HP 387, Willis 270) That public was, over time, created by the Hogarth Press.

Publications by the Hogarth Press: 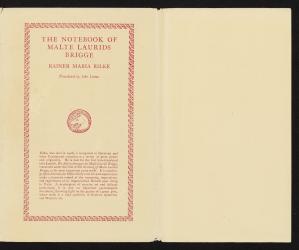 The Notebook of Malte Laurids Brigge 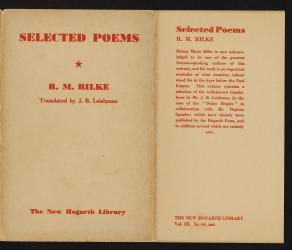 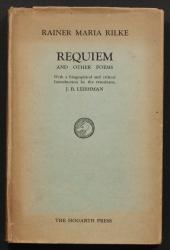 Requiem and Other Poems