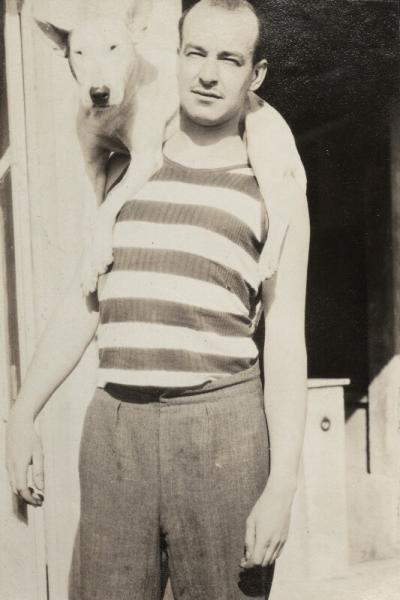 John Banting was born in London in 1902.  His father was a teacher and a bookbinder.  Banting trained as a painter with Bernard Meninsky in London and at the free academies in Paris.  As a young artist, he was influenced by Vorticism and later turned to Surrealism.  His studio was in Fitzroy Square in Bloomsbury.  He exhibited throughout his lifetime.

Banting was engaged in the commercial art scene.  He designed sets for several Sadler's Well's ballets and multiple covers for various publishers, including the Hogarth Press, Secker and Warburg, the Allan Wingate Press, MacGibbon and Kee, and Weidenfeld and Nicolson.  His designs for the Hogarth Press (in the mid to late 1930s) include the Hogarth Letters series, the Hogarth Poets series (including The Magnetic Mountain by C. Day Lewis and The Noise of History by John Lehmann),  the World Makers and Shakers series, Ilyria, Lady by Constance Butler, The Mermorial and Mr Norris Changes Trains by Christopher Isherwood, The Case is Altered by William Plomer, The Twilight Age by A. Prophett, Grammar of Love by Ivan Bunin, Fritz Faulkner's Windless Sky, Henry Green's Party going and K.Swinstead -Smith's The Marchesa and Other Stories.

Banting published The Blue Book of Conversation in 1946 at the Editions Poetry in London.

Banting's vast circle of friends included photographer Barbara Ker Seymer, painters Cedric Morris and Arthur Letts-Haines (with whom he spent time in the South of France), and actress Judy Wogan, Alix Strachey, Edward Sackville-West, Angus Davidson and Rupert Doone, Bright Young People Brian Howard and Edward Gathorne-Hardy, artist Humphrey Spender (Mass Observation), Eileen Agar, Man Ray, Barbara Hepworth, Len Lye (with whom he collaborated on the film The Birth of the Robot), Julian Trevelyan and Edward Burra.  He had a romantic relationship with poet Nancy Cunard, contributing to her Negro anthology (1935) and traveling with her to the U.S. and to Spain during the Spanish Civil War.  Cunard introuduced Banting to Duchamp, Beckett, composer Georges Antheil, and Louis Aragon. He is also tied romantically to Brian Howard.

Buck, Louisa. The Surrealist Spirit in Britain. Whitford and Hughes, 1988.